My experience at Wordcamp Nashik 2016

Wordcamp was my first formal meetup in my life at the age of 12.9 years. This wordcamp was at Nashik in NEC (Nashik Engineering Cluster) on 16th October, 2016. I’ll also let you know how I came to know about #Wordcamp.

One week before the Wordcamp

My mother, Yogita Patil is fond of reading newspapers for hours. She just found an article in newspaper, which was describing about the Wordcamp Nashik 2016. After reading everything, she informed me as it is most likely my favorite interest. She told me that its a community of bloggers who are coming there for networking and asked me about going there. As it sounds interesting, I said a great “Yesssss….” 🙂 From that day, I was totally excited for 16th October to come.

Next day, I booked a seat of wordcamp at https://2016.nashik.wordcamp.org/

After I booked seat

Being excited, I was also nervous. I even thought about ‘Do I have that knowledge to visit #Wordcamp?’, but my mother encouraged me by saying that it will be a great experience for you. At that time, I wasn’t knowing much about wordpress. I was a developer who use to code. When I heard that it is a wordpress community, I was more tensed. Then I tried knowing what wordpress is. Only 4 days were remaining for WordPress to go. I searched for ‘How to install wordpress‘ on Google and installed it on my mother’s website, www.bebzcozzy.com. It became an Ecommerce website. I tried everything what I saw on the WordPress dashboard and learned WordPress. I came to know a lot about WooCommerce at that time. (Products are not uploaded yet on that website.) Then, I gained somewhat confidence to go Wordcamp.

One night before the Wordcamp

This was the time when I was supposed to sleep. But, unlike doing that, I kept thinking for tomorrow. I even thought about ‘Is there any age restriction at Wordcamp?’, ‘Is it safe for me to go there?’, ‘Will everyone there co-operate me?’, ‘What if I misbehaved there? (Like I do at my Home)’ and so on…

Then, I made myself ready just by thinking at night for the next day!

The Day of Wordcamp!

This was the day I was waiting for and the paragraph you were waiting for! I’m sorry to hold you on for much time reading the stuffs over this paragraph :-|.

On that day, my mother dropped me at the compound of Nashik Engineering Cluster. I said her, “Wait in the compound for taking me home if in case I’m rejected because of age”.

Then I just entered the space where receptionists asked for tickets. I showed them the mail I received and got the chance of entering wordcamp! Then I became very excited. Then I called my mother saying that “I’m comfortable here, you can go now” and she too became happy after I said that sentence.

The first boy I met:

The first boy I met there was Chaitanya Kshemkalyani. We behaved much formal first time and talked with each other about profession and interest. Then after, we became friends following each other at Wordcamp. Some people there also assumed him to be my brother. Yes, we were looking like bros, but were friends!

Then I met Nisha Singh, who owns WPoets. She encouraged me there.

Then after I met many people who encouraged and boosted me. Everyone there suggested me to make my coded website of IQubex, a WordPress site.

People there cooperated and inspired me to do something for WordPress and World. After 10:00 am, I was in complete comfort and adjusted myself according to the environment.

The best thing I liked was the Auditorium. There, everyone was given an opportunity to ask experts. Everyone there was allowed for networking and I too got a chance to introduce my website to everyone.

There were many things to do. Everytime I used to ask crew about what is to be done next, they suggested talking with WordPress experts and Wordcamp organizers. And I did the same and was encouraged by Mr. Sanjeev Mishra, who was the organizer of Wordcamp. I also met the chief organizer, Harshad Mane and he too, boosted me.

Lunch time was a great time where people use to enjoy and network. I met everyone and had there phone numbers. This went much exciting. At this period too, Chaitanya Kshemkalyani was with me and he too introduced me to everyone. The lunch was delicious. I liked everything what I found there.

There were many speakers who told the campers there knowledge and how wordpress will help them in life. They also told people about the benefit bloggers gain by blogging and the patience we should have for that. They introduced many plugins and they proved useful for many campers.

There were two panel discussions. One was a successful team of bloggers discussing there points and the other was the discussion of people who contributed to wordpress.

The tweeters were awarded!

There was a competition on Twitter about who will send the best tweet on #WCNashik. I tweeted a lot, but unfortunately I wasn’t a good tweeter. 🙁

Every hour, two tweeters were awarded.

And, at the last

I was called by the organizers in the front of 250+ people in auditorium and boosted me a lot. I greatly thank them for this and would never forget that. 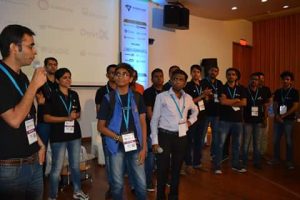 Someone captured this sily pic of mine…

The last man I met:

I met the one who took an active part in first panel discussion. He also owns a successful blog which nearly brings 9000+ users per month. He was Mr. Rahul Bansal. He lives in Pune, and before my article, he posted an article about his experience of Wordcamp Nashik (http://rahul286.com/blog/wordcamp-nashik-2016-diary/). This gave me an idea to do the same.

So, this day went very exciting for me and I kept thinking about that day after a week also. Really, this was the most exciting day in my life.

Be sure you comment about your first formal meetup. See you soon!