5 Reasons You Should Join a Guild in Arena of Valor

You might have noticed that Arena of Valor gives you the option to become the part of a guild. If you’ve been playing solo so far, you might wonder what the point is, but there are tangible benefits to joining a guild in AoV. The ability to join a guild is unlocked at level 6 and most guilds have requirements from prospective members. Here’s what you have to look forward to when you join a guild in Arena of Valor.

Each week, all guild members receive a chest, which varies in quality based on how active the guild has been. Every time guild members play a match together, the guild as a whole receives activity points, which then decides what each member receives in the weekly prize. What’s not to like here? Play more, get more free rewards!

2. Experience Aov At Its Best

Arena of Valor is a game that shines the most when played with a group of friends. But like with most games, it might be hard to get others in your life interested in it. Instead of trying to pitch the game for the billionth time to uninterested friends or family members, simply join a guild and make friends there! Playing this game with a group of people you know well and communicate well with is an immensely rewarding experience.

3. You’ll Get Better At The Game

Speaking of rewarding experiences, you’ll find that playing regularly with your guildmates will slowly translate to getting better at Arena of Valor as a whole. Since many guilds require players to be of a certain skill level and ranking to be able to join in the first place, you’ll get to play with others who also want to get better at the game and who enjoy winning matches. 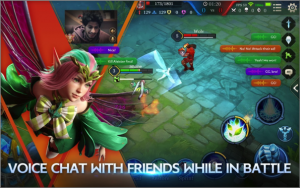 Playing with random people, without joining a guild or enlisting a bunch of friends, means that you’re less likely to communicate well with them. This usually leads to people picking heroes without really thinking about team composition and the in-game potential of a draft, even with the built-in feature that tells you how well-rounded the lineup is. If you tend to pick last, you are usually left filling in the gaps in the draft, which limits your options.

But when you’re playing with guild members, everyone on the team is more likely to communicate and pick a well-balanced team, allowing you to try a variety of heroes and roles, which will help you find the role and hero that are best-suited to your playstyle.

5. Get A Taste Of The Competitive Scene

Consistently playing with highly ranked players, who live in your city or region, means that if there’s ever an AoV tournament happening near you, it’ll be a simple matter to find players to enter it with. Since you’d most likely have played with these people beforehand, you’ll even have a decent chance of winning big!

If you haven’t been able to find a guild that fits exactly what you’re looking for, you could always just create a guild of your own! For a small fee of 50 tokens, you can name your guild, pick an emblem and a motto, and advertise it on the forums to attract like-minded players.