While we keep hearing news about the Blue whale game, we get to know about all the levels of this game, how this game hypnotizes teenagers, the history behind it and what not? But, media just lacks one statement that the existence of this game is not yet confirmed! Guessed which game? I’m talking about the Blue Whale Challenge game. In the recent affairs, we often go through its mysterious logo of The humpback whale which is a species of baleen whale. 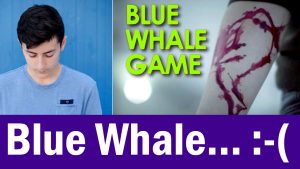 All what you knew about this game was a myth! Stay careful with correct information!

This game is said to be created by a Russian programmer in 2013 and by 2017 it spread like a wildfire. In this game, ‘It is said’ that teenagers needs to complete many harmful tasks to get one level ahead. And most annoyingly, at the last level, the 50th level, one has to give his/her life to win the game! It is known that Blue Whale Challenge is an online game which is owned by admins. They appreciate the child after he/she completes every stage. They send some hyper musics for the child to hear. And if the child denies to complete levels, the admins could blackmail him/her by saying that they can leak child’s data. Thus, of course, this game is harmful.

But, does this exist? Is this a game which can be asked to be avoided by you when you can’t already play it? Can you find and play this game? Well, let us find this out.

Why does the question arise?

If you tried finding for the Blue Whale Challenge Game, you would probably not find any such game at all. If you searched it on Play Store, you’ll get all fake apps regarding it. Same on the iStore. If you are searching for an ‘.apk’ file of the game from 9Apps, then you would always find fake stuffs but not the actual game. This game even does not have their official website on which you can play. Moreover, Kochi’s Cyberdome Chief stated that this game doesn’t exist! So, do you still think this game exists? Maybe you gave up. 🙂

Opposing all this, I still believe a 10% that this game is existing. And I’m 90% sure that the concept is working out somewhere in this world; Not like a game, but like a mindful strategy.

See also: How to build and run a successful clan in Clash Of Clans

In Europe, it is said on a regular basis that 150-200 teenagers have given their lives playing this game. Here it is also believed that 300-400 are playing the game. If believing went aside, all we can ensure is that this game exists only 1%. May be teenager who  can easily go through suicidal depression will be the pray of this game.

Though this game does neither own any official domain nor an app, the admins can let teenagers play this game by sending them links. Those secret web links give them a pathway to the game and an end to their life. There are many teens who reported such links but then the links were deactivated. The deactivation of the link only when it is reported shows that admins are working on the strategy at least somewhere in the world.

Here’s my video on the same topic I discussed on YouTube [watch it here].

The Russian developer who made this game in 2013 is said to be arrested by the Russian police. But before his arrest, the Russian spoke that,

I want to separate biological wastes and low self esteemed teenagers away from the happening society because they cause trouble which leads to sadness. Instead, why not ship them out?

This was an hilarious statement given by the programmer. This statement tells two things:

If someone said that they played this game, simply screw him/her by saying that this game does not exist. It exists only when an admin sends a link to play. And even the existence of these links is not confirmed. So, simply saying, BLUE WHALE APP OR BLUE WHALE CHALLENGE IS AN URBAN FAKE!