The Difference between Server Side and Client Side Explained 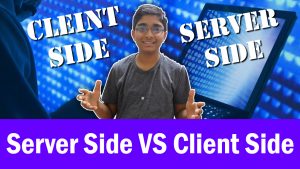 The difference between Client Side and Server Side

These terms are used to denote the nature of a software or a computer program. For example, it is used to categorize the software in two parts. Server Side and Client Side. These words are most probably spoken by a developer or a programmer.

The difference between Server Side and Client Side!

Now that you know where the terms are used, its time to strike you with a pure example. If you play an online game, consider a game like Clash of Clans or Clash Royale, you’ll find it difficult to hack if compared to an offline PC game.

In an online game, the real files which constitute the game are stored in developer’s (Supercell’s) server. So, you don’t get a chance to edit those files on your side.

Secondly, just think about a game like GTA. Not only that, but try considering other offline game you play. You have to just Install the package, unzip the files, and then… Game belongs to you! You may edit it, hack it or simply fire it but the developers would not know what is their software/game facing.

Read Also: How to run a Successful Clan in Clash Of Clans

#1: The game/software which is connected to the server without letting users edit the files is a Server Side Scripted Game/Software.

#2: The software/game on which the developers doesn’t have any control after the user downloads the game/software, is the Client Side Scripted Game/Software.

If you’re a WordPress blogger, then you must be familiar about WP Plugins you use. Some of them are paid and most of them are free. Many of those plugins also have their own website where they introduce it.

Consider WordPress plugins like WP Iconizer. It is not configured with any kind of server and all the plugin files are directly connected remotely. That means the developer cannot figure out what is plugin facing. You can edit the plugin anyway and do anything with it.

Then, consider plugins like OptinMonster, Vinubis. Those are just the embedded versions of their websites in WordPress. So, you have no chance of hacking in the plugin and changing values in Plugin Editor. They charge you monthly for plugin usage.

Just think if about a plugin which is not connected to the server. The developers would not be able to charge you monthly. They can only charge you once.

I have talked the same in my YouTube video, where I demonstrated the difference with more useful examples.

Be sure you watch whole video and Subscribe my channel for more cool updates.

So, I hope you are cleared about what I meant. Comment below your thoughts about this article and be sure you Share because Sharing is Caring.